2. And if that is not bad enough, the rich are now using coffee beans extracted from civet droppings. As with the fur trade, these wild animals are farmed in disgusting conditions purely for this product. This is currently a huge industry!
Read  more @ http://world.time.com/2013/10/02/the-worlds-most-expensive-coffee-is-a-cruel-cynical-scam/

4. Ambergris is a by-product of the digestive system of endangered sperm whales. This briny and vomitous substance comes from their “diseased stomachs”  – either puked or pooped out. It is worth a lot of money and the genuine article is STILL valued in perfumes.

5. Musk, a sexual secretion, comes from the gland of a male musk deer. Due to hunting and habitat destruction this species is near extinction. Consequently, musk is worth “3-4 times its weight in gold”.

Please read Amelia’s interesting and comprehensive post on the musk deer @ http://mungaiandthegoaconstrictor.me/2014/01/22/fast-fact-attack-endangered-species-no-100-the-siberian-musk-deer/
Of course the human race is nowhere near extinction but continues to plunder the earth’s fauna and flora for its own gratification.

THE SAD REALISATION OF AN OPIUM USER

Opium, with its heady scent, is a perfume created for fashion designer Yves Saint Laurent (YSL).  It was a perfume that I enjoyed wearing as it reminded me of the Zanzibar spice fields, which I have visited. Then, when I started investigating more deeply into the fur industry I learn that Yves Saint Laurent has a huge real fur collection. I was mortified!

So why am I sharing this experience?
Well, I have learnt how important it is to check out products if one wants to live ethically. Not only might ingredients be tested on animals but there might also be fur in the closet.

Well done Four Paws (UK) for taking a stand against the fur industry.

Please support them by signing the petition below, addressed to Burberry.

London Fashion Week 2014 is drawing to a close. Sadly, fur was seen in full force.

Yes, non-human animal fur is beautiful – but only on the original creature.
If it is not bad enough to torture and kill non-human beings solely for their fur, designers then dye this fur in gaudy colours.

To me, people involved in this despicable industry have become disconnected from their souls.

PeTA has many creative ways to campaign against fur!

GIVE FUR THE COLD SHOULDER

Have a wonderful weekend everybody.
Please let people know there are many ways to keep warm without wearing fur!

As discussed in my previous post PeTA grabbed the opportunity at the Sochi Winter Olympics to protest against the barbaric fur trade (https://emynow.wordpress.com/2014/02/09/russia-way-behind-on-animal-protection). Kudos to PeTA for using the clever slogan “champions don’t wear fur!” As part of this campaign two sexy PeTA “snow bunnies” braved freezing weather to let people know that “wearing the skins of animals who were beaten, electrocuted or strangled to death is unacceptable”. I have no doubt that these bunny girls caught the attention of many people. However, was it the gaze of those who like to look at good bodies or of those who were going to be persuaded to never again adorn their bodies with fur?

I totally understand that if a mature woman with a fuller figure, turned blue by the cold were to prance around in a bikini it would not have the same effect. My question though, is it appropriate to exploit women in this way to promote a campaign against the exploitation of animals in the fur industry?

This is not the first time PeTA has used naked women for its cause against fur. Many models have posed for the I’d Rather Go Naked Than Wear Fur campaign.

This poster is part of the Here is The Rest of Your Fur Coat campaign. It is a particularly powerful image, but does that justify a naked woman holding the body of a skinned animal?

Wait a minute you might say. What about all the naked men that PeTA photographs in its Ink Not Mink campaign. The message, however, in this campaign is different to those mentioned above. Please see my previous post for more information on this  (https://emynow.wordpress.com/2013/10/07/male-mink-huggers-not-wimps/)

The point of this initiative is to show that the pain of getting a tattoo cannot compare to the pain that foxes, minks, rabbits, coyotes, and even cats and dogs endure for the fur industry. In other words, these are tough guys. In fact some have even been charged with domestic violence!

So to come back to the question is PeTA sexist?

Well one definition of sexist  is, “attitudes, conditions, or behaviors that promote stereotyping of social roles based on gender” (http://www.thefreedictionary.com/).

To me, the message PeTA is putting out in some of its anti-fur campaigns is that women are decorative and therefore will catch the eye of the public. I feel the bunny girls particularly perpetuated this stereotype.

On the other hand, the Ink Not Mink campaign indicates that even tough and rough men can choose not to wear fur. The fact that they might abuse substances and/or have restraining orders against them is not an issue. They are men after all.
I would appreciate your input on this debate, as it raises a whole range of issues.

RUSSIA: Way behind on animal protection

A Message to Moscow: Throw Fur Out!

Many countries are slow to put animal protection law on the agenda. However, Russia is actively going backwards on this issue! According Mikhail Novikov, who lives in Russia, the Parliament of the Russian Federation officially condones the regime of killing of animals. Every year, officials of the Russian Federation kill more than 700 thousand homeless animals by the cheapest and cruelest methods. There are no attempts to implement sterilisation schemes to address the problem of these strays. The government remains indifferent to pleas from animal rights activists, even now with the world’s attention on Russia.

The 2014 winter Olympics is being held in the city of Sochi, southern Russia.

Close to Sochi is Pyatigorsk, which has a huge fur industry. Although China is currently the world’s largest producer of fur, there is a high demand for fur items in Russia. So PeTA has stepped in with their anti-fur campaign.

Billboards have gone up across Moscow, each one graphically illustrating how many animals are killed just to make one fur coat.

Olga Shelest, model and TV presenter (who is also vegan) is the face of the campaign. She states,“My philosophy is to live my life without leaving a blood imprint on this planet. I will never wear fur, because it’s made from someone, not something.” We can only hope that The Russian government will catch up with the international trend to ban fur. Please, wherever you can, put pressure on the Russian government to change its attitudes towards non-human animals!  Here are two petitions for these voiceless beings:

DOCUMENTARY: CRY OF THE INNOCENT

CRY OF THE INNOCENT: The Voices That Can’t Speak

“A precedent-setting film revealing the spiritual truth of an egocentric society that perpetuates the holocaust of animals, with its center on the fur trade”.

“This is not one filmmaker’s project – this film is a collaborative union of souls coming together toward a common goal that will make a significant impact on humanity and the lives of animals who die in silence every day”.

CRY OF THE INNOCENT: The Voices That Can’t Speak is making great strides throughout the world with precedent-setting media coverage in China, the mecca of the cruel fur trade industry.  If a trailer alone can achieve this success, imagine the impact of a completed film!

It is estimated that around two million dogs and cats are being slaughtered in China for their fur, every year. This is a ‘cheap source’ of fur because the animals are usually strays, stolen pets or used for food. Subsequently, the fur is exported under false labelling to Western countries or used in the Chinese domestic market. 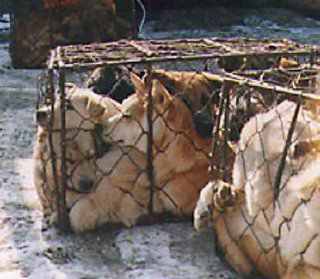 Our strategic partner, ACTAsia for Animals, has exposed the film trailer in many parts of China and Singapore with impactful results.  The trailer was also posted on their media site in China and is gaining critical exposure.

ACTAsia’s recent newsletter focusing on the cat and dog fur trade highlighted the film to their wide network of advocates and influencers.  http://us4.campaign-archive2.com/?u=23e66498b9734f4652bc5d0ae&id=6ea7e4ed30&e=e1c337fdff

We must remain vigilant in this mission! 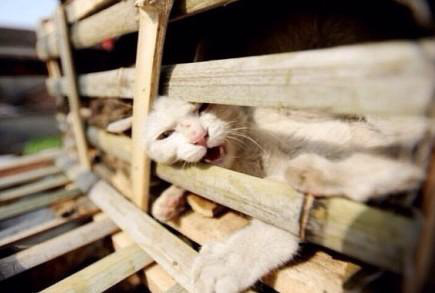 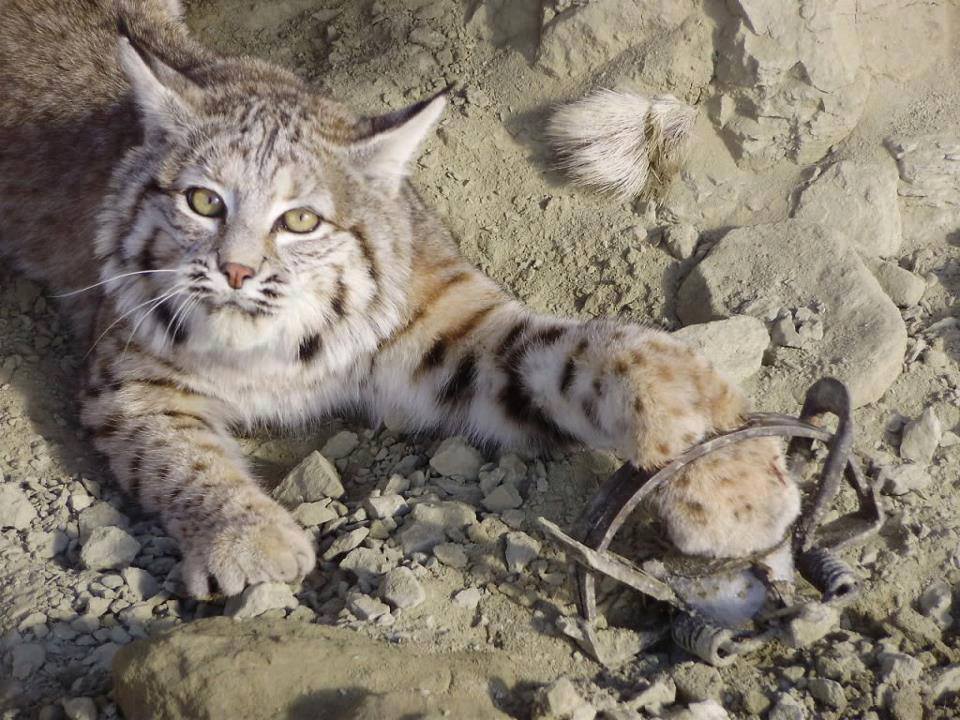 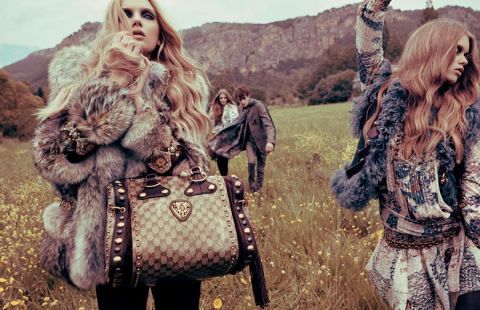 “The condition of disconnect in our society is the nemesis in the destruction of our ecosystem and the animals that inhabit our planet.” – Kathleen Lowson, Director

“The difference between who you are and who you want to be is what you do. PLEASE CONSIDER A CONTRIBUTION TO THIS IMPORTANT FILM”  http://www.indiegogo.com/projects/cry-of-the-innocent-the-voices-that-can-t-speak/x/1717367

HOW MANY DID YOU KILL FOR VANITY?

About 26 million minks are killed, usually asphyxiated, every year for the sole purpose of acquiring their skin. Many skins make one fur coat.

Madonna in a chinchilla fur coat

See previous post for information on celebrities and fur:  https://emynow.wordpress.com/2013/10/02/celebs-and-fur-the-good-the-bad-and-the-ugly/